In 1942, Benito Mussolini proudly declared that an Italian air raid had destroyed the Maltese railway … but the vapur tal-art had ceased to function more than a decade ago.

The train served the route from Mdina to Valletta for almost 50 years and was very popular when it was introduced in 1883, reducing to 25 minutes a ride that would otherwise have taken three and a half hours on a cart pulled by mules.

The efficient railway was designed by the same team who, 25 years earlier, had drawn up the plans for the London Underground. The British wanted extend the system to the north and south of Malta, including Gozo.

Interview with Paul Galea, President of the Malta Railway Foundation

But by the first quarter of the 20th century, commuters had become familiar with the idea that scheduled buses could pick up and drop off passengers in remote locations, out of reach of the train tracks.

“People thought that the introduction of the tram at the turn of the century would spell the end of the train. But the tram stopped running 15 months before the train, and it was the buses that spelled the end of the railroad, ”Malta Railway Foundation chairman Paul Galea told The Times of Malta.

Almost a century after its demise, Malta is rethinking its traffic system, with the government proposing a three-line underground metro system. “The system will work underground because most of the airspace has been built. It will take years to build, and if we had preserved Malta’s rail system, we might not have to start the whole process over from scratch.

“However, it’s easier to say it in retrospect. I wonder if, if I had lived at the time, I would have been in favor of the train. There have been cases of farmers destroying entire fields in a fire started by a spark from the train, while land has been expropriated to make way for tracks.

Local and English entrepreneurs were also not very fond of the train as the system was self-sufficient and they could not profit from it: the British not only imported railway material, but even trained employees in-house. And there is at least one police report accusing a karozzin driver of leaving stones on the tracks to derail it.

Several people whose work in one way or another was linked to the Maltese railway moved to Ħamrun, forever changing the social fabric of the locality. Photos provided by the National Archives of Malta. 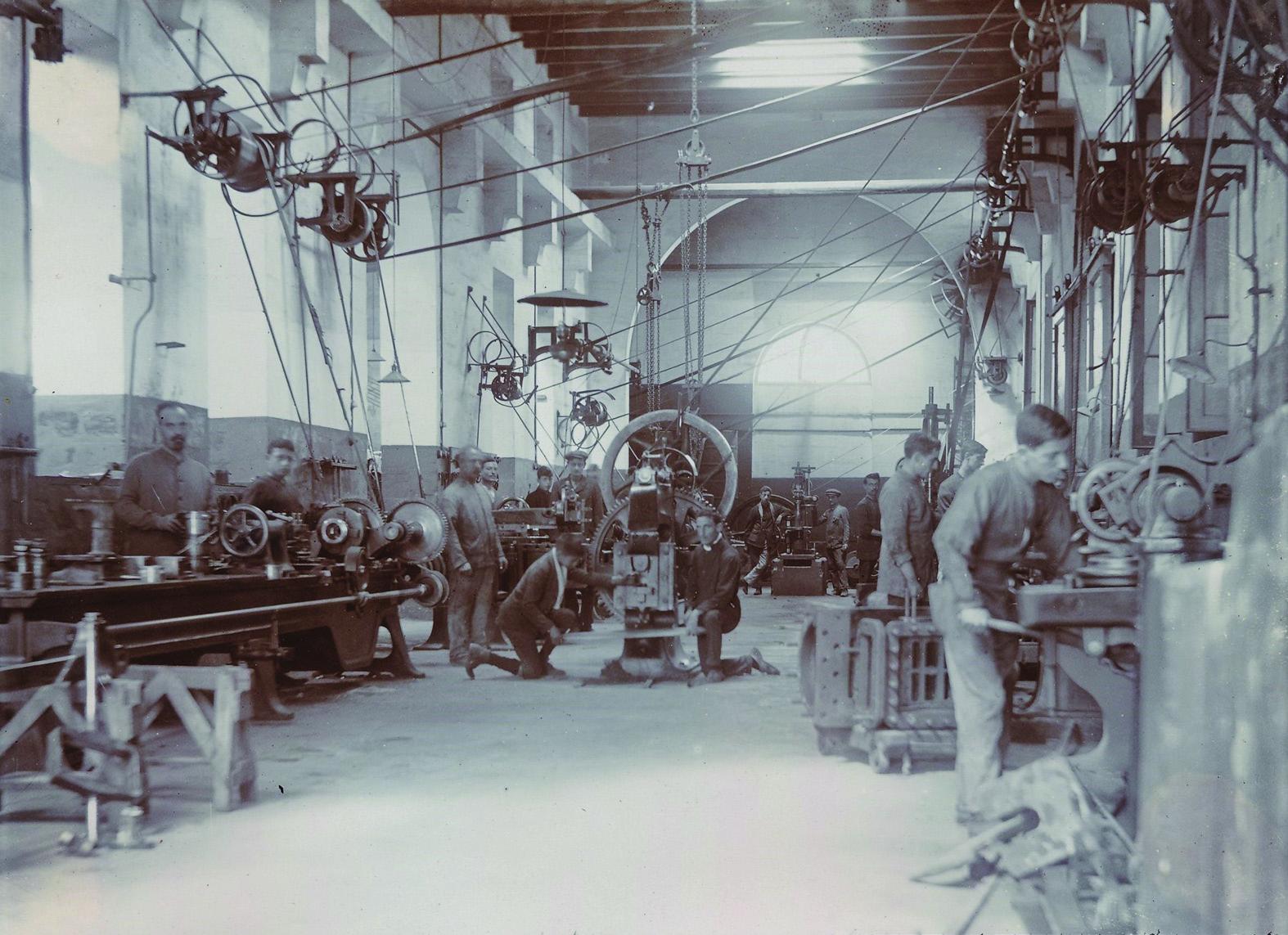 The workshops at Ħamrun were not only used to train employees of Malta’s railways and to do structural work on the system, but those who were trained there also took the Admiral Dockyards exams.

The train’s passage through Malta is not marred by any major tragedies, although people attempted suicide on its tracks, while others were injured by a passing train as they attempted to cross the lanes. The death of a commuter from a heart attack went unnoticed until a driver approached the man in Valletta to tell him the trip was over.

“St Aloysius’ College students would also bet on their ability to beat an oncoming train and cross its tracks before it passed their school building. Other students would put a penny on the tracks to calculate the number of commuters on the train by analyzing the bump it left on the copper coin. Thank goodness no one was hurt in the process. 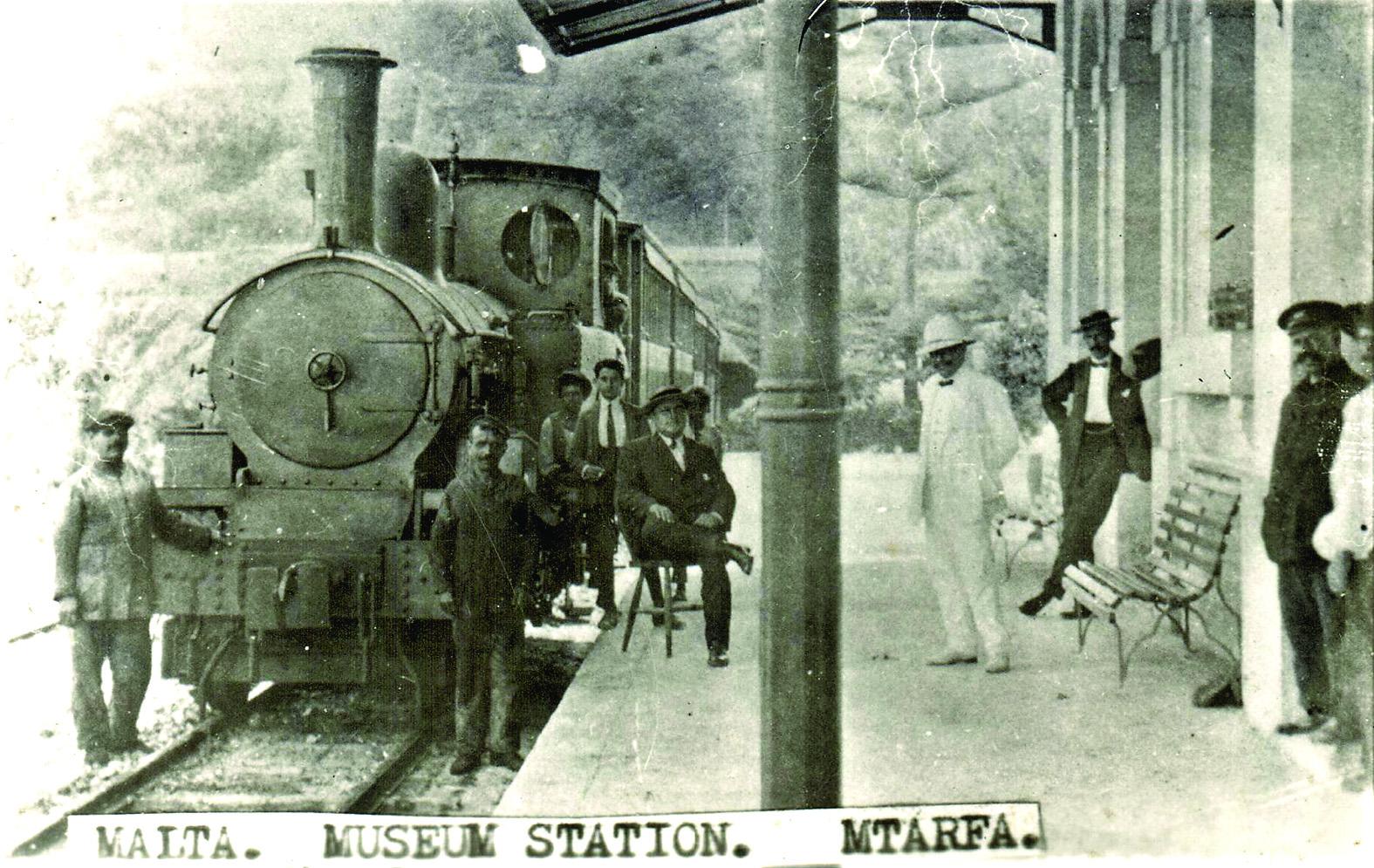 A train at the Mtarfa museum station. 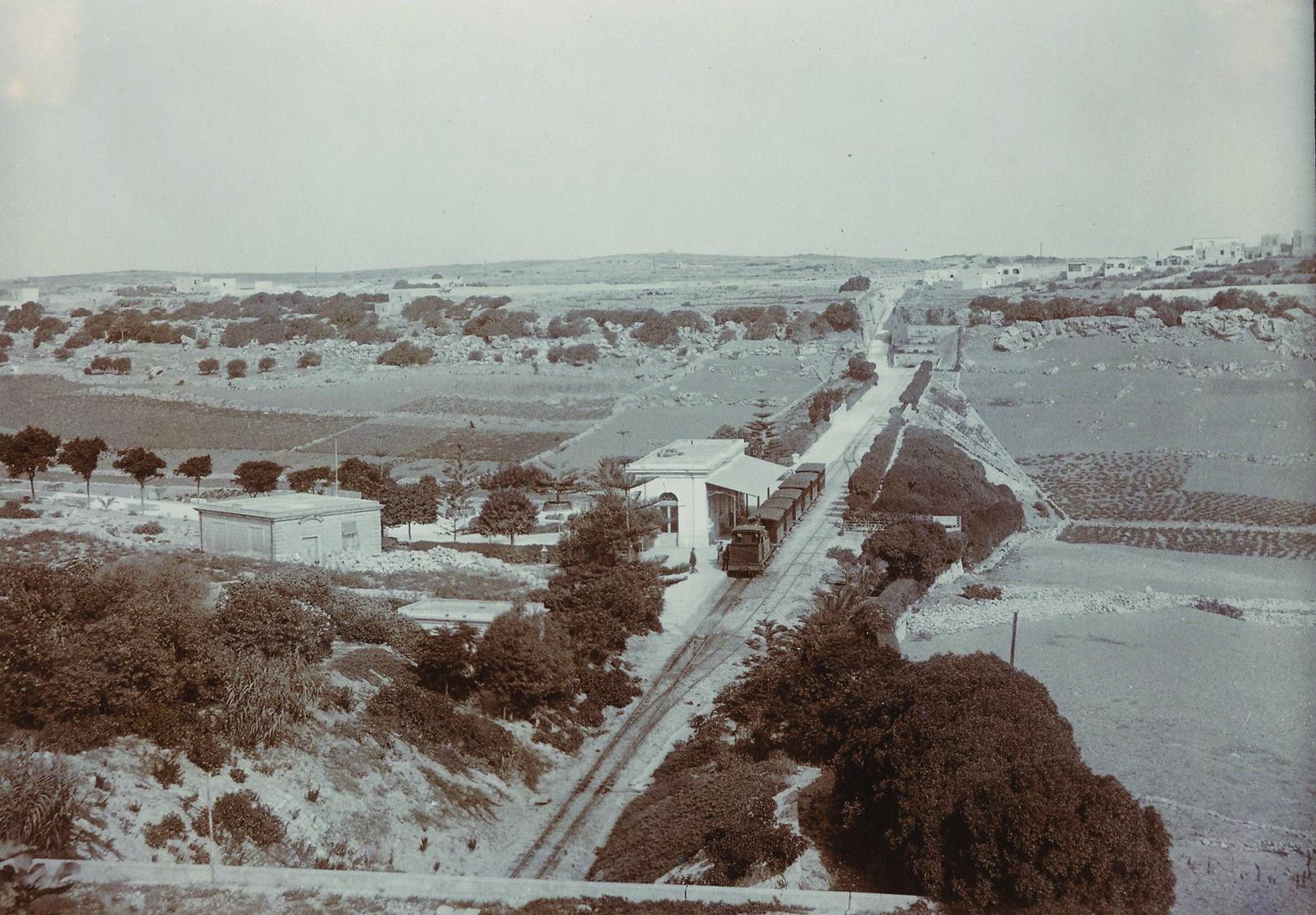 Another view of the Museum station and the Gheriexem valley between Rabat and Mtarfa.

“However, a herd of bulls was not so lucky: some 32 bulls were killed by a train approaching Santa Venera from Rabat. The guard had set up a chain closing off access to the tracks, however, this meant nothing to the herd, which was traveling to Msida from Marsa.

These anecdotes are kept for posterity by the foundation, which in turn digitizes its material and deposits it in the National Archives of Malta. 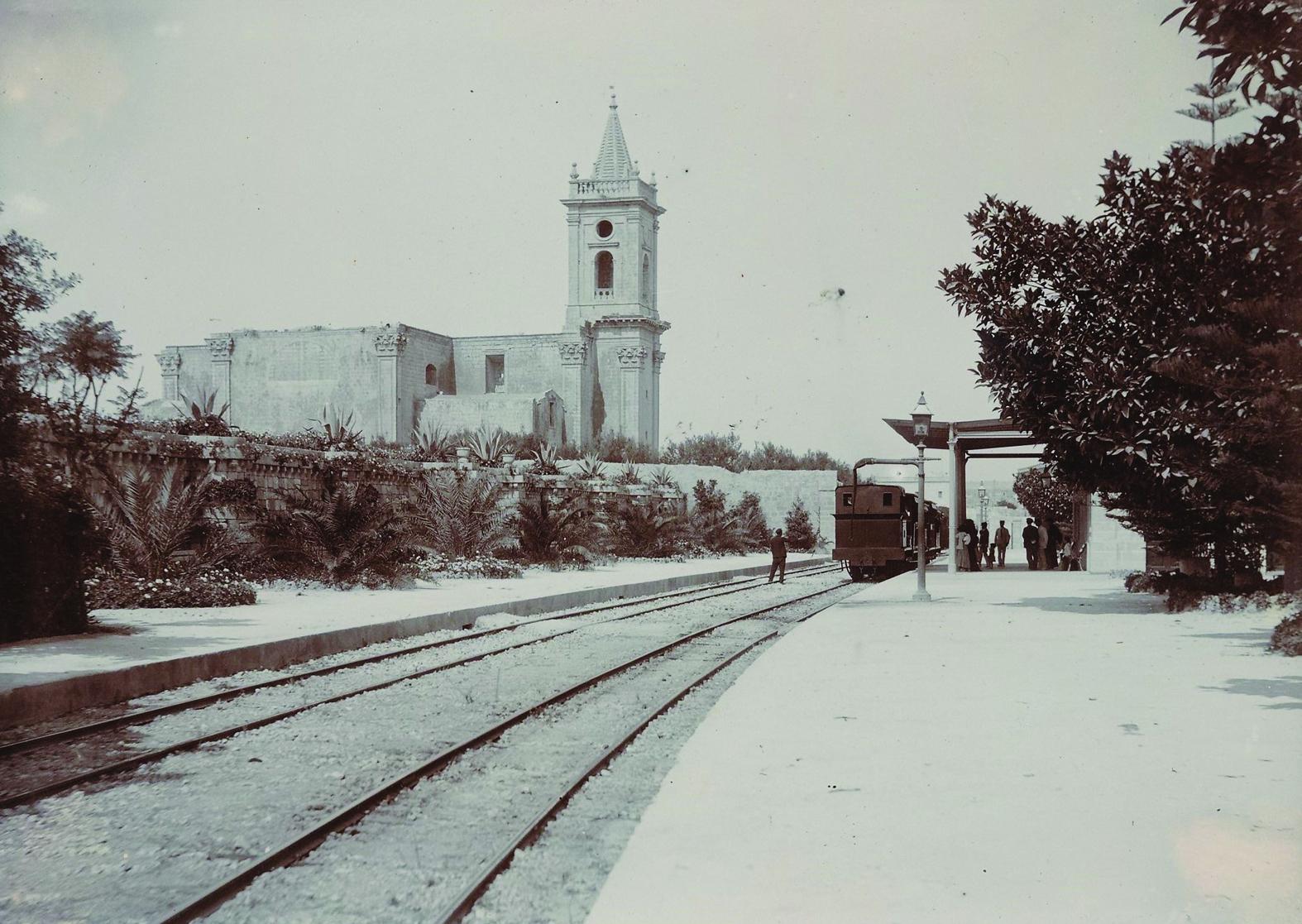 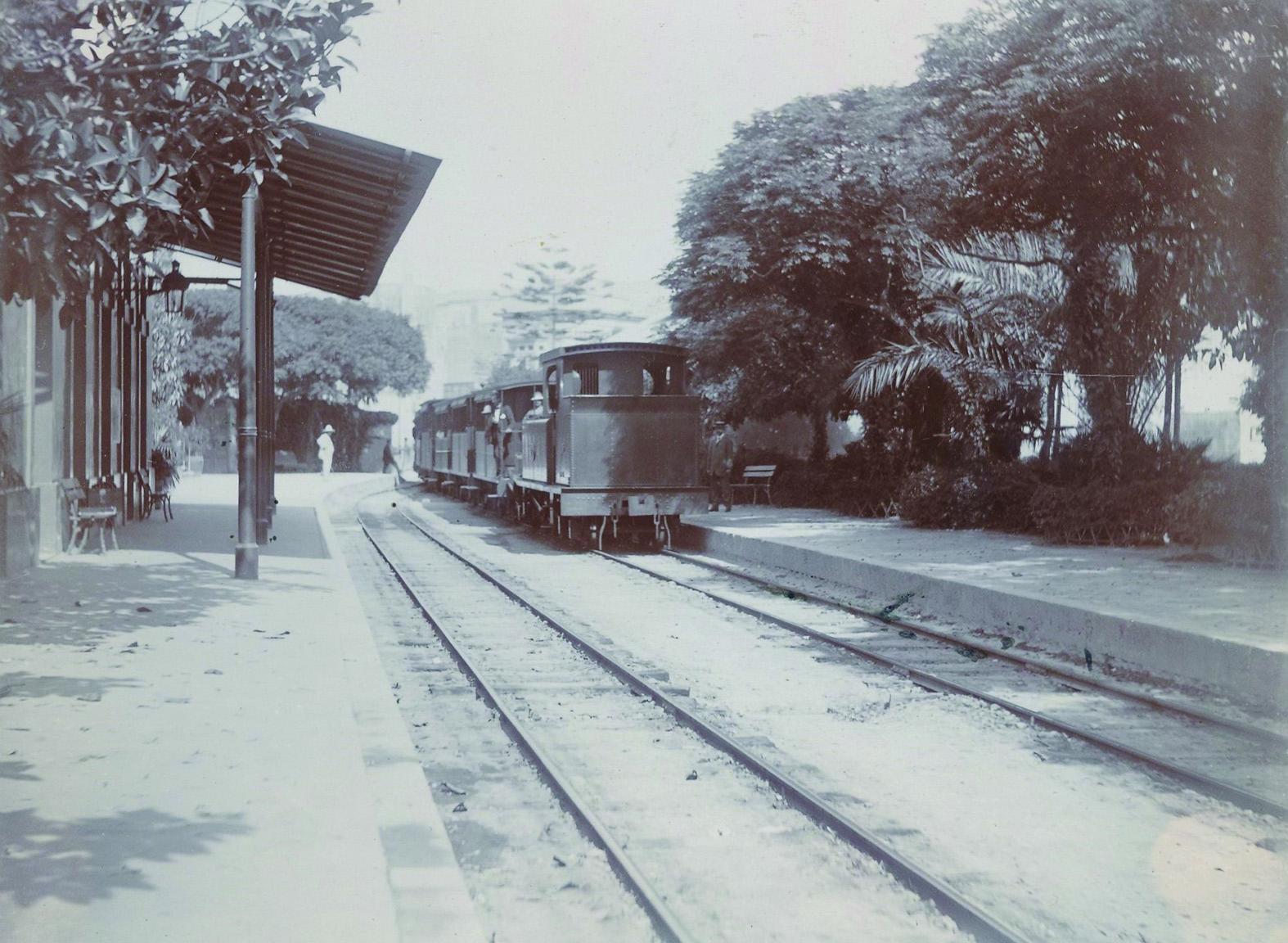 Another view of Birkirkara station, which will host a transport museum.

In the meantime, in collaboration with the town halls and with the help of European funds, the foundation has, among other things, restored the last remaining wagon and the Birkirkara station, which will house a transport museum. He also obtained European and local funds to build a replica of the Attard quay.

The Birkirkara Museum will not only host artifacts, but also showcase the lived experiences of passengers. 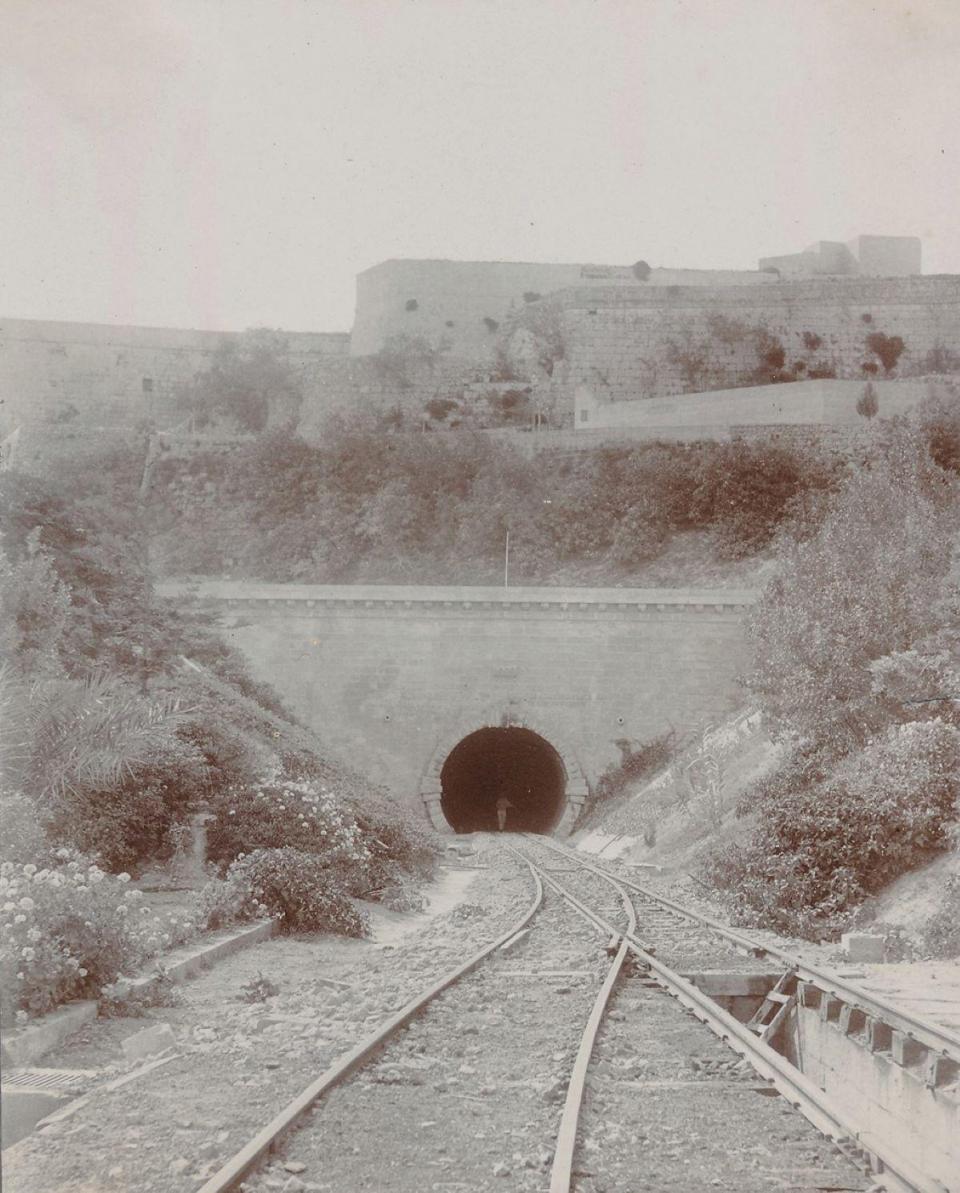 Entrance to the railway tunnel under Mdina which linked the Notabile and Museum stations.

“Some anecdotes are linked to the mina sewda (black tunnel), located between Floriana and Valletta. There are reports of women being harassed when the train went underground, leaving passengers in total darkness.

“The soldiers who were posted to Malta also fell in love with stories of ghost sightings in this tunnel, looking at their heads out the window to spot paranormal activity. But all they would catch was soot on their faces, which they would only notice to their embarrassment once they got through Strada Rjali and I saw their reflection in a window. 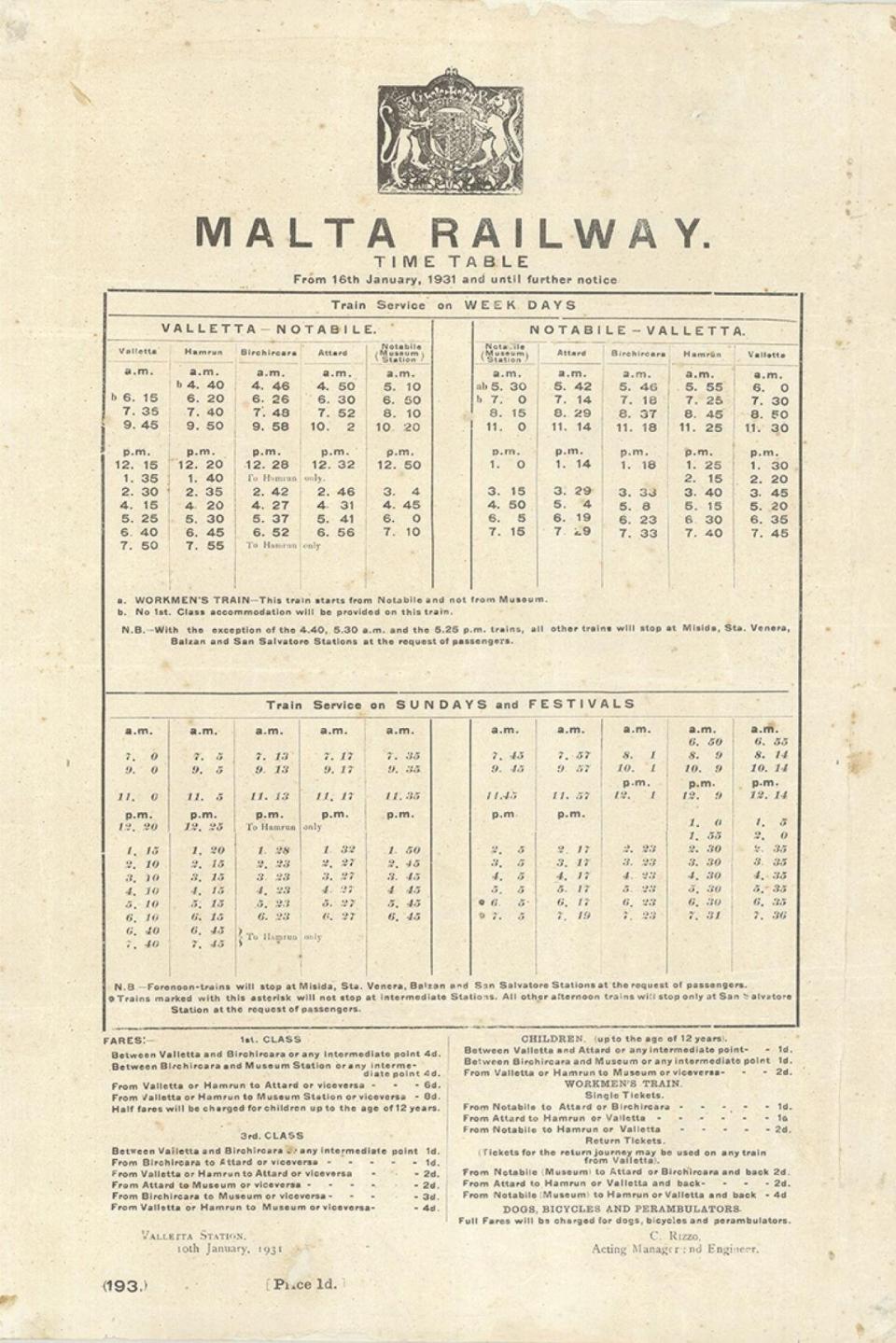 This 90-year-old Maltese Railway timetable dates back to 1931, showing the different fares for first and third class passengers, while dogs and bikes paid full fare.

Records also show that not everyone could afford to take the train. Among others, Herbert Ganado recalls, in Rajt Malta Tinbidel, joining his siblings in begging their father to take a train trip. “For many, including those with good reputations in society, the train rides were a treat… a unique experience that remained a dream for many children.

“It has been reported that drivers even close one eye when spotting children without a ticket, while others reuse the same ticket multiple times, or ride first and second class with a third class ticket in hand.” 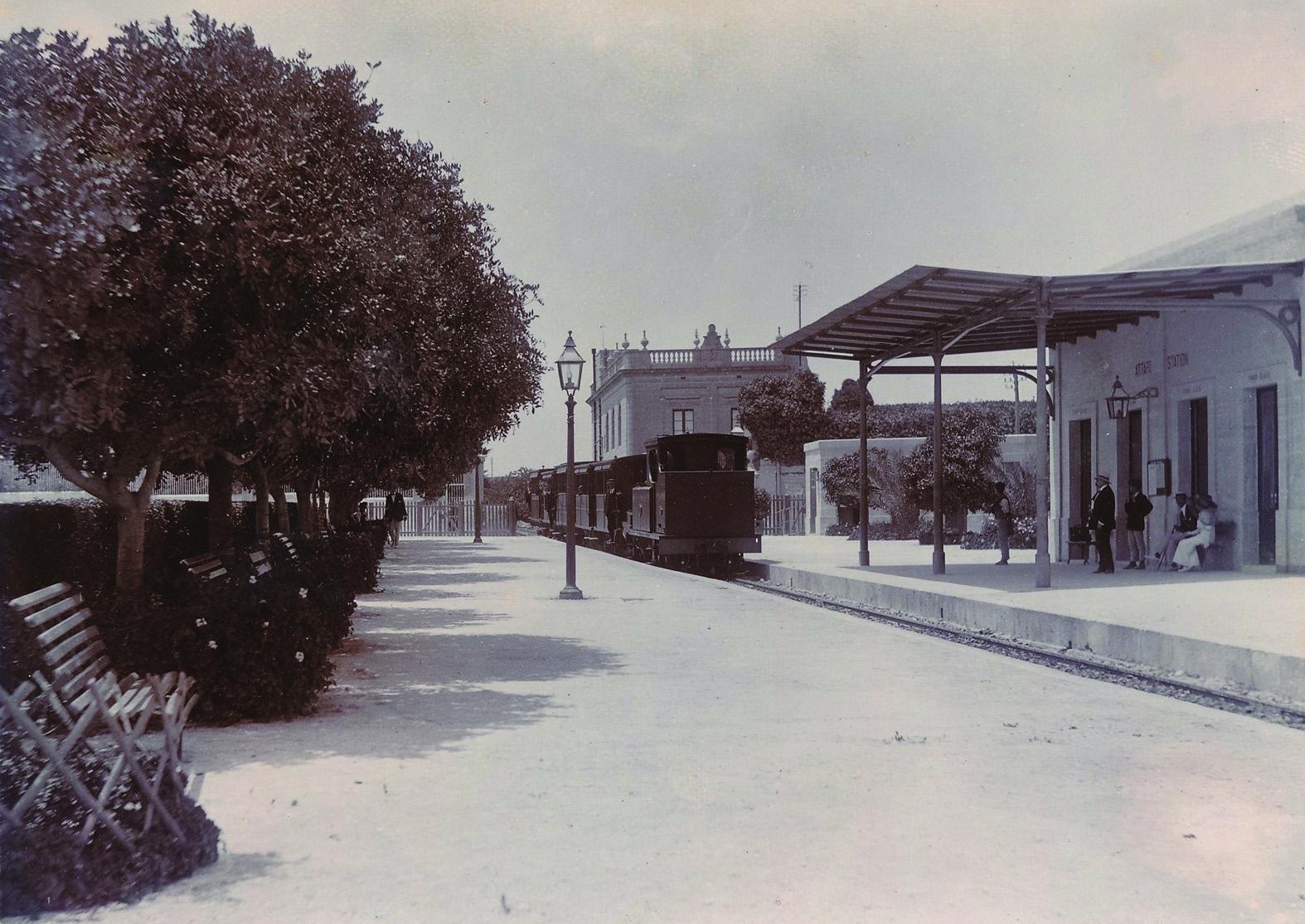 This article is published as part of a series entitled The Hidden Treasures of Malta, a collaboration between the National Archives of Malta and Malta timetables. The project, part of the European Digital Treasures co-funded by the European Union through the Creative Europe program, allows readers to gain insight into Maltese history and society through our archives.

Readers can find more at the National Archives of Malta headquartered in the historic Santo Spirito building in Rabat and other archives. If one cannot visit the archives in person, one will soon be able to access an oral and visual online archive called Memorja.

The website will be the main repository of recent Maltese national and public memory and will house hundreds of memorabilia dating back to the 1920s. Those interested in this project can register online at www.memorja.com before the launch of the site.

For more information on the National Archives, call 2145 9863 or email [email protected]

Independent journalism costs money. Times of Malta support for the price of a coffee.